What to Know About the Rising Costs of Flood Insurance 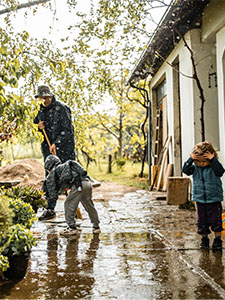 Every year between June 1 and November 30, hurricane season takes the Atlantic and Gulf Coasts by storm. Power outages, uprooted trees, ruined buildings, and high flooding all cause billions of dollars in damages to towns and nearby homes. In 2020, Hurricane Laura cost a total of $19 billion. Six weeks later, Hurricane Delta struck the same area, adding another $2.9 billion in damages. While there’s not much that homeowners can do to prevent storms, they can prevent the costs from stacking up.

When you purchase a home, you will likely need to purchase homeowners insurance as well. Homeowners insurance helps people financially protect their home and belongings from damages caused by natural disasters, theft, vandalism, or fire. Though coverage varies, most policies will include external damage to your home, garage, shed, fences, or walls, and internal damage to your heating and cooling systems, kitchen appliances, furniture, clothing, and other possessions. In certain areas, you may need to purchase additional windstorm or flood insurance if you want your home to be protected from hurricane-related damages.

According to Bankrate, the average cost of homeowners insurance is around $1,300 per year (for a $250,000 dwelling coverage). However, homeowners insurance premiums can range anywhere from $500 to $3,500 – depending on your dwelling coverage and home location. If your home is located in an area that’s at high risk for flooding, it could be higher. Homeowners with policies under the National Flood Insurance Program (NFIP) pay around $1,800 per year for flood coverage. But with the NFIP’s new rules, this price could rise by over $240 a year for some homeowners.

What are the new NFIP rules?

The NFIP’s changes, dubbed by the Federal Emergency Management Agency (FEMA) the Risk Rating 2.0, will use updated weather data and flood modeling to better predict properties that are at high-risk for flooding. Previously, FEMA used their neighborhood flood maps to help predict flooding and determine premiums. But recently, these maps have been criticized as being out-of-date, and private insurers have been competing with the NFIP by using more advanced technologies.

Who benefits from the updates and what are the costs?

One of the upgrades to the new risk rating system is its ability to consider an individual home’s elevation and proximity to large bodies of water. For example, let’s say you live in a neighborhood by a river or lake. Your neighbor might live right on the water, but your house might be located up the road on a hilltop. With the previous risk rating system, you and your neighbor would both be paying the same amount on your flood insurance. But with the new system, your rates would be lower. This update could also help people living in apartment buildings or condos. If you live on a higher floor, you will get lower rates due to your decreased likelihood of flooding. Additionally, rates will be more heavily influenced by a property’s replacement value. So, if you live in a more expensive penthouse or on a beachfront property, your rates will likely rise.

According to the FEMA, the new changes to insurance prices will actually be more fair for policyholders. Though $240 per year is the increase for some homeowners, others might be paying less for their coverage. The average price hike will be no more than $10 a month. For 4% of policyholders, the price will rise by $20 or more per month. However, 20% of homeowners will pay significantly less on their flood insurance – with premiums dropping by over $80 per month.

Overall, the new NFIP updates will help thousands of homeowners and should level out the flood premium playing field. No matter if your rates rise or fall with the new policies, it’s a good idea to purchase flood insurance if you live near a body of water. According to FEMA, just one inch of floodwater can cause $25,000 of damage. If you would like help finding a reliable insurance agent, we would be happy to share any recommendations we might have.