What Lies Ahead for the FHFA? 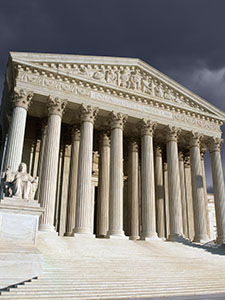 Last week was a busy week for the Federal Housing Finance Agency (FHFA). On Wednesday, the Supreme Court decided that the structure of the Agency was unconstitutional. By Thursday morning, Biden had appointed a new director. Sandra Thompson, FHFA’s deputy director of the division of housing mission and goals, will replace Mark Calabria as director of the FHFA. So, what exactly happened and what’s coming next?

In the previous structure of the FHFA, the Biden administration was not permitted to replace the Agency’s director. Through Collins v. Yellen, the Supreme Court determined that restricting the president’s power to remove the FHFA director is unconstitutional because it violates the separation of powers. The separation of powers refers to the three branches of government (legislative, judicial, and executive). Under this system, no one branch should be allowed too much power. “The Constitution prohibits even ‘modest restrictions’ on the President’s power to remove the head of an agency with a single top officer,” wrote Supreme Court Justice Samuel Alito. “The President’s removal power serves important purposes regardless of whether the agency in question affects ordinary Americans by directly regulating them or by taking actions that have a profound but indirect effect on their lives.”

After the ruling of the Supreme Court, President Biden made swift changes to the FHFA leadership. Soon after the Court’s decision, FHFA director mark Calabria announced his resignation. The White House then promptly appointed Sandra Thompson as the new acting director. “It is critical that the agency implement the Administration’s housing policies,” a White House official said in a statement. “As a result, in light of the Supreme Court’s decision today, the President is moving forward today to replace the current Director with an appointee who reflects the Administration’s values.”

Thompson has been working with the FHFA since 2013. During this time, she oversaw housing and regulatory policy, capital policy, financial analysis, fair lending practices, and all mission activities for Fannie Mae, Freddie Mac, and the Federal Home Loans Banks. Before her time at the FHFA, she led a 23-year career at the Federal Deposit Insurance Corporation.

“I am honored that President Biden has designated me to be Acting Director of the Federal Housing Finance Agency until a permanent Director is confirmed,” Thompson said. “I look forward to serving in this role at this crucial time. As a longtime regulator, I am committed to making sure our nation’s housing finance systems and our regulated entities operate in a safe and sound manner.”

The FHFA presses on

The Supreme Court did not decide to completely dismantle the FHFA – which was created in 2008 to help oversee Fannie Mae and Freddie Mac. Private shareholders at Fannie and Freddie argued that all of their company profits were going to the government and wanted $124 billion in reparations. Additionally, they wanted the Supreme Court to completely disassemble the FHFA. Instead, the Court agreed to uphold the president’s ability to replace the Agency’s director. Now, in Thompson’s words, the FHFA will continue to fulfill its duty of ensuring that “all Americans have equal access to safe, decent, and affordable housing.”