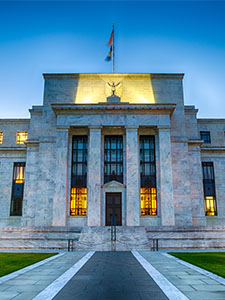 This week could be a big week for mortgage rates with the Federal Open Market Committee (FOMC) meeting coming up. On Tuesday and Wednesday, the Fed will discuss the benchmark interest rate and other important economic decisions. Many expect they will announce the tapering of asset purchases following this month’s meeting. The Fed interest rate decision will be announced on Wednesday afternoon.  In housing news, the construction spending report will be released Monday afternoon.

The Federal Open Market Committee (FOMC) sets the federal funds rate.  The federal funds rate will influence mortgage rates but not set them exactly.  When the Fed raises rates, mortgage rates typically go up.  When the Fed lowers rates, mortgage rates typically go down. In September, the FOMC decided to leave the benchmark interest rate unchanged, though it mentioned an expected six rate hikes by 2024. It also discussed the likelihood of asset tapering soon. Fed Chairman Jerome Powell said that they expect the tapering process to end mid-2022. Consequently, mortgage rates have been steadily rising since the last FOMC meeting in anticipation of asset tapering soon. The tapering of asset purchases typically indicates a dip in investor demand, which tends to push rates higher.

When the Fed announces the tapering of assets, mortgage rates will likely rise. However, they’re still hovering at levels lower than pre-pandemic rates. Locking in your mortgage rate now could help you save thousands of dollars in interest over the life of your loan. To explore your rate lock options, contact us today or click the “Get Started” button above.